In February of this year I visited North Texas Human Society to set up an adoption event for one of my communities. A bunch of small, yapping dogs made it hard to hear and the strong smell of urine made it hard to focus. Patiently waiting for the representative, I found myself browsing around the shelter. A bunch of super cute dogs were begging for my attention. I was never really a “dog” person.

In the corner of the room I noticed a small pup minding his own business while attempting to do what seemed like a back flip in the kennel. Unlike every other kennel, this one had no paperwork attached.

The rep came out and I immediately asked her about the puppy. She said “that’s a female and she’s been adopted–and as you can tell, she’s very clever!” My interest quickly faded. A: I prefer male dogs and B: she belonged to a home already. Who am I kidding, I’ve got a 6 year old and I’m not a “dog” person. Or any animal person, really. My son is a species of his own who doesn’t shed much, but does have this trick where he sucks the energy from the sun and manages to hold it all in until I say the magic words, “bed-time”.

We finished up our meeting and she stepped away to grab a business card. I was drawn back to the clever pup’s kennel while I waited. Let’s see how that backflip is going. The rep returned with an ear to ear smile, “I’ve got good news and great news. The good news is we’re all set for the event”, handing me her card, “The great news is, this pup is still up for adoption. And…she’s actually a HE–Sherlock. She opened up his kennel where we found he somehow removed his paperwork and tucked it perfectly under his bed. Clever, indeed.

He didn’t bark or cry once. He had big, honey-brown eyes that looked up at me with no expectations at all–but slightly hinting that he was ready for a good ear scratch.

In case you missed it, I’ve never been a “dog” person, but “Sherlock”…he was different. He had an obvious and abundant amount of love to give and his big honey eyes told me he needed someone to give it to. I thought, I know just the kid.

Fast forward to ten months later. I did rename Sherlock–but only because he didn’t answer to the name, there were 5 other Sherlocks in the shelter, and he had only been in the shelter a few days. He has a beautiful black coat, and is a little bit of a rebel but also a badass. I stuck with the detective theme and chose Bruce Wayne, AKA B-Dubb the Boss.

I didn’t know it then, but I think I needed Brucey more than he needed me.

My apartment is awfully quiet when my son spends summers, long weekends and holidays with his father–hours away from home. During these times I find myself slipping into a small depression, unable to escape the comforting grip of my bed for hours on end. I know Bruce senses this, because I see sadness in his eyes, too. So I crawl out of bed, throw on my Nike’s and we’re off for a walk, run or hike. After some fresh air and a few miles tracked on my fit bit, the anxiety from separation fades, endorphins are flowing and I realize I’m not alone. 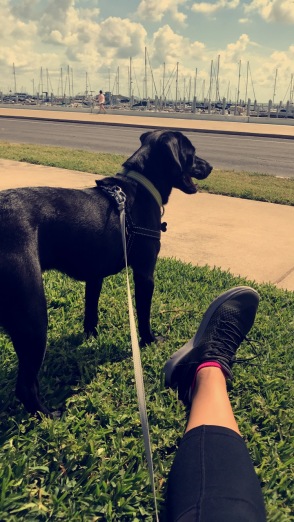 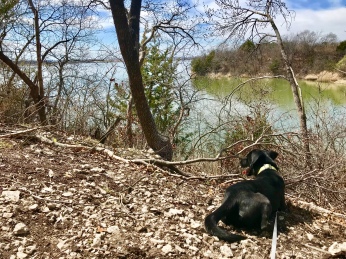 Matthew absolutely adores this dog, and Bruce has undying love for his “brother”, too. Knowing he is off the streets scavenging for scraps to survive and now in a safe place he can call his own–that gives me life. And when I say a place to call his own, that’s an understatement. If you dare sit on his white pillow that is on his half of the couch–he will legit try to pull you off by your feet. He is energetic and has what can sometimes be an overwhelming amount of love to give. And that’s all he wants in return–love.

The loves of my life.

Nothing against finding a dog outside of a shelter, but if you’re open to even considering a rescue, please just take a second to look. They not only need homes, they need love, and are fully capable of giving love, too. Bruce was house-trained within 2 weeks. He was vaccinated and had check-ups courtesy of the shelter. He was initially kennel trained, but now roams free all day among my apartment while I’m working with no damages, accidents or surprises. He is one of the greatest blessings to come into my life and I strongly, strongly encourage those who have the time, patience and yearning for a little four-legged love– consider rescuing rather than purchasing from a breeder.

You’ll be surprised on who saves who. 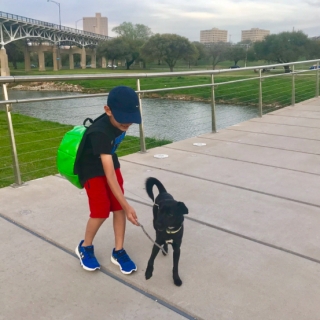